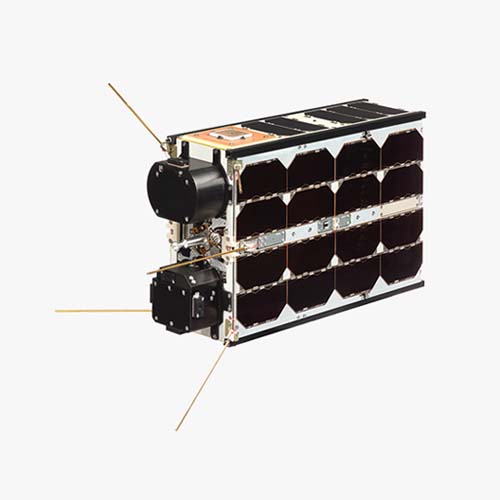 The NanoAvionics Multi-Purpose 6U Satellite Bus is a 6U satellite bus with modular design, and standardized architecture optimized for constellation.

The standard configuration of the M6P bus is for IoT, M2M, ADS-B, AIS, other commercial and emergency communication applications, and scientific missions. M6P configuration for Earth Observation (EO) missions are available as an option.

Maximization of the payload volume is enabled by the hardware layout. It also ensures robust power functionality and thermal control for sensitive payloads, such as measurement and sensing instruments.

Sophisticated mission code preparation and payload integration service can be offered by NanoAvionics according to separately agreed terms and conditions.

The system uses the open source FreeRTOS real-time operating system. The FreeRTOS is light weight, reliable, relatively simple and easy to use. The kernel is designed specifically for integral embedded systems and provides a full set of the task scheduler, resource management, and synchronization features.

Critical system such as the Flight Computer, Payload Controller, Electric Power System and Communication System are supported by implementing radiation-resistant components and design to ensure reliability.

Data and tasking delay challenges that are critical to the professional service applications, are eliminated through the implementation of intersatellite link system via GEO satellites and integration with KSAT ground station network for constant connectivity.

The M6P bus includes a propulsion system. The subsystem can perform high-impulse manoeuvres such as orbital deployment, orbit maintenance, precision flight in formations, orbit synchronization and atmospheric drag compensation.
The propulsion system is designed to offer new opportunities for unique missions and a significant savings on constellation maintenance costs.

The propulsion unit also provides satellites with decommissioning capability at the end of mission, meeting the space debris mitigation requirements of ESA and NASA.

M6P FlatSat access will be provided to help accelerate the development process, payload integration and testing cycle as well as enable simulation of the entire satellite mission.

NanoAvionics also has access to Launch integration services covering programmatic aspects such as securing the specific launch slot, coordination of logistics, arrangement of mission-specific documents and technical aspects related to flight preparation and integration of the spacecraft with the deployer.

NanoAvionics follows quality control procedures by ISO 9001. The company is certified since 2018.

Design of each subsystem of the bus is qualified by thermal vacuum cycling, vibration and shock testing following National Aeronautics and Space Administration General Environmental Verification Standard (NASA GEVS GSFC-STD-7000A) levels. Overall design is based on these ECSS standards and handbooks.'

Electronic subsystems are assembled and qualified in accordance with the IPC-A-610 class 3 by IPC certified specialists applying the requirements for each individual electronic component containing the systems. Three dimensional Automatic Optical and X-Ray inspection is performed for each of the assembly.

Electromagnetic Compatibility (EMC) testing at the bus level is performed to qualify robustness against adverse effects of electromagnetic interference from external sources, internal subsystems or the electromagnetic environment of space.

Mechanical components are subjected to measurement checks for tolerance control. Incoming and outgoing items inspection is performed at NanoAvionics to minimize the risk of faults and failures due to the discrepancy of the components.

All subsystems of the satellite bus are radiation tested under 20 kRad Total Ionizing Dose (TID). Additionally, mechanically complex subsystems such as reaction wheels are tested by accelerated lifetime tests to qualify proper functionality.

Design qualification testing reports of satellite bus can be disclosed to the customer if required.

For traceability purposes each system has a unique number indicated, where the serial number refers to a unique item list and the technical documentation of the product. Incoming/outgoing inspection documentation can be released to the customer if required.