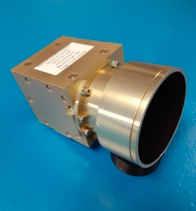 The Redwire Star Tracker is intended for orbits that have a typical design life of 5 years and is well suited to CubeSat and NanoSat missions due to its small size, weight and power (SWaP). The unit is completely self-contained and features Lost in Space star identification. When power is applied, the spacecraft begins receiving quarternions accurate to 10 arcsec at 4 Hz rate, and a maximum tracking rate >2° degrees per second. Leveraging its heritage in producing advanced star trackers and compliant with the Buy America Act, Redwire's low-cost, high-performance Star Tracker is a COTS component supporting commercial, civil, and defense missions.

The Star Tracker's processing unit, including an advanced star-tracking algorithm, records the accurate measurement of the spacecraft mission's position during orbit for optimum real-time attitude determination, and accounts for interference effects of light reflecting from the satellite's surfaces and exhaust plumes during propulsion sequences.

While 50-60 main navigational stars are primarily used to determine a satellite's position, the minimum number of catalog stars visible in any stationary image of arbitrary attitude (free of Earth, Sun, or Moon blockage) will be at least 7 and more typically 10 or 11 stars.

The Star Tracker can be used for a number of applications, across a range of missions, for attitude awareness & positional knowledge. Key features of the Redwire star tracker include: