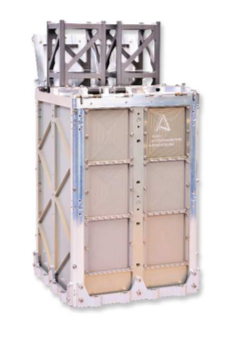 The PicoSatellite Launcher (PSL) family is designed to ensure the safety of the CubeSat and to protect the launch vehicle (LV), the primary payload and other satellites to be launched. After the safe transportation of the device into the orbit, a deployment with a high reliability and a low spin rate is achieved by patented design principles. After a successful deployment, a telemetry signal is available for the launch provider.

The product features are:

Deployer for 1U, 2U and 3U CubeSats and combinations

Fixation of the CubeSat in X,Y and Z during launch (patented)

Large clearance for attachments on the CubeSat

Qualified for a variety of launch providers

The innovative development was successfully tested by the University of Applied Sciences Aachen with their satellite project COMPASS-ONE under zero gravity during a parabolic flight.

BEESAT-2, BEESAT-3 and SOMP were launched using the picosatellite deployers on April 19th 2013 from the rocket launch site in Baikonur as piggiback of the research satellite BION-M1 on a Sojus rocket.

One SPL will be used to deploy BeeSat 4 from the BIROS satellite.We also had successfully placed three DPL and two TPL on the market.